The last couple of days where finetuning, bug inserting and bug extracting :-).

Some homemade problems that had to be rectified (like losing again some sources – and forgetting what exactly had been done).

Is it a bad thing, that I like to play my own games? I hope not.

The “Glitch” is still somewhere deep in the code [saw him once today] and hiding.

“You glitch! – Yes, you in the release code – by the powers invested in me by vectrex-programmerhood – I declare you a FEATURE!”

“You are now free to roam the program “Release” – and irritate players. That is the intention for you by your creator MALBAN.”

So – thats that – now Release is officially bug free!

I uploaded another video to youtube – no Highscore – but a tiny little score of about 60000. Near the end a tiny little action is ongoing. Please consider that the score is not even a fifth of my highscore – and what might have been going on THAN. 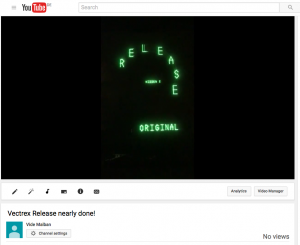