This blog starts in February 2017.

As you can see from the about section, ideas and thoughts were done way earlier than that.

Here the absolut short form of the current history:

These and other things will be the cause, that the expected writing of “Release” will not be a matter of weeks, but probably more be a matter of months.

If you want to see some ingame footage of the original game, on the google android appstore is a short video sequence:

I must admit, neither the apple appstore nor the original homepage of release do the game justice. They do not in any way explain what the game is about nor are the screenshots anywhere usefull to determine what a great game Release really is.

And honestly even after watching the video I bet there are more question open then answered. So …

I will try to explain what the game is about.

The game doesn’t bother about a made up story of you defending some planet or whatever – it is a game without story.

The player can do only two things:

These are the only controls you have in the entire game. The rest is “timing” the above “action”.

The player “base” is in the middle of the screen represented by a polygon. 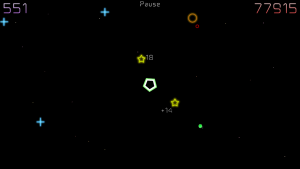 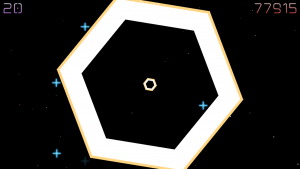 All the while different enemies approach from all sides closing in to the center. Once they touch you (the small centered polygon) the game is over. In the beginning very few enemies appear – but the game soon gets quite stressful.

There are a couple of different enemy types: 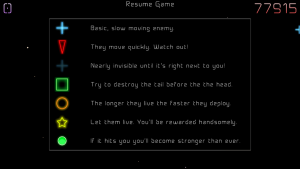 Which also behave differently (see above). The clue to get high scores are the little yellow stars. At maximum three can be there at any time, they circle the player and are as easily destroyed by your shield as any other object.

Each second they provide you with bonus score – the longer they live the more bonus score you get. It starts with only 10 points per second – but if you play well can get up into the hundreds.

There even is a “power up” system envolved, which – at least for me – is sort of a two sided medal. While there are nice boni, e.g. getting a shield or getting a larger area of destruction, there are boni e.g. “faster” which IMHO make the game more difficult. The “faster” lets (as the name might suggest) the polygon grow faster – for my poor reaction time TO fast, so I tend to miss the enemies and die.

I usually try to destroy all boni befor they touch me, that way I can add a little bit more determinism to my game.

One thought on “The start…”