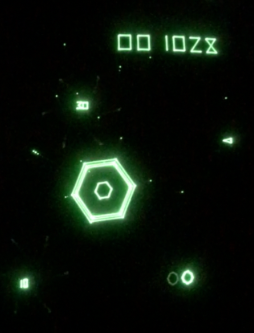 There is still a “glitch” in Release that I seem not to be able to track down.

In the video you can see it at 1:22 minutes or score of 1028 in the game – the bomber “glitches” for one frame. The glitch seems always to coincide with the removal of an object (score or explosion). This seems to be easy to find – the code for removing an object is 30 something lines… But there is nothing wrong with the code! Otherwise the game wouldn’t function at all.

In the video (over 6 minutes) that was the only occurrance I could find. It is SELDOM. On the emulator I have not been able to see it at all.

I came home from my holidays and did stuff that is not really game related but “beautifying”.

You can also see that in the video. Stuff that has been done in short order: